I’ve made those cinnamon rolls twice before I got my bread maker. Each time they came out looking and tasting pretty good, but I wasn’t thrilled with the effect in general. Neither my husband. We ate them with cream cheese frosting which actually made them more enjoyable.

Last Saturday I decided to give them one more chance and I was craving cinnamon rolls.

I got up MUCH too early and I though it’s a perfect time to make those as the process takes about 2 hours. This time I used help of my dear friend, the bread maker 🙂 and that was the best decision I could ever made. Those “nothing special” cinnamon rolls came out as THE BEST CINNAMON ROLLS I have ever had !!!

Fluffy, soft inside and with a crunch on the outside. Those previous two times I made them they weren’t half that big and fluffy. I guess I am not as good in hand kneading as I though I was. In addition in my entire apartment there is no place warm enough for the dough to raise. A few times working with yeast dough I tried to leave the dough in warm oven but that didn’t work for me at all.

Look at those beauties. They were so good that I didn’t have to make any frosting just a little bit of butter spread over hot rolls and that was it.

This recipe is adapted from Chef in Training. I changed a few things to make them more healthy.

Ingredients for the dough:

Ingredients for the filling:

10 Tbsp. brown sugar (more or less), divided in half

4 Tbsp. cinnamon (divided in half)

After it’s done (in my bread maker it takes 1h 10 min), divide the dough in half. I never use rolling pin to roll the dough out. I use my hands to stretch it in into about 11 inch x 9 inch rectangle shape.

Don’t be greedy and spread a generous amount of softened butter (in my case it’s about 2 Tbsp, sometimes a bit less sometimes more – it depends on how big the rectangle is) over the surface of rolled out dough. Rub half of the brown sugar over the dough. You might start with 4 Tbsp. and if you decide it’s not enough add more until the surface is covered. Sprinkle 2 Tbsp. of cinnamon. Feel free to add more.

Starting from the longest side fold the dough towards you.

Put them into greased pie pan or on a baking sheets. Cover and let rest for 30 minutes.

Repeat with second half of the dough.

This time I used both: pie pan and baking sheets to compare which is better.

7 seems to be a perfect amount as you can see on the picture above.

… and while in the oven they leaked out the filling: 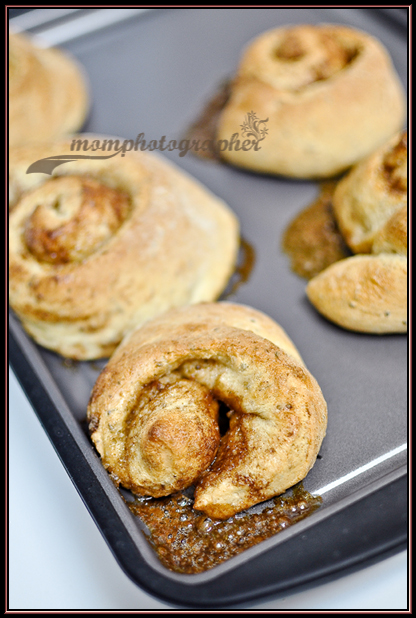 Rolls baked in pie pans where clean and nothing leaked out. They came out bigger and fluffiest, too. 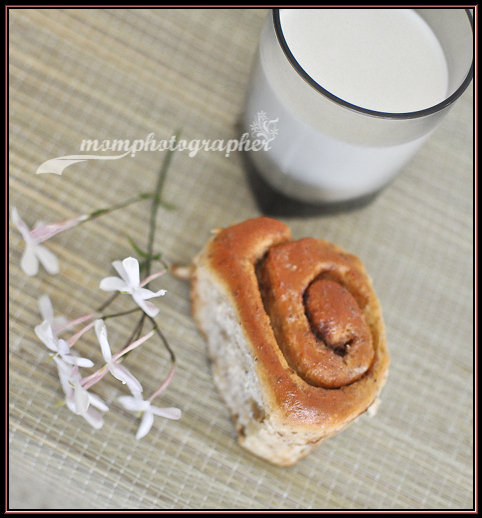 They were so delicious and with the perfect amount of sweetness that we didn’t need any frosting at all. I spread a little bit of butter while still hot to make them more moist and not so dry on top.

I still highly recommend the cheese cream frosting from the original recipe. It’s so good that every time I make it I eat half just by itself.

This Little Lady ate 4 of those huge rolls on the first day and she kept asking (in her own language) for more.

I had to hide them as I was afraid she’s gonna get sugar rush. That’s there is the best indicator that the rolls were really good. Before, she wasn’t really a big fan of those. She would eat a half of one small roll and she was done, she didn’t want more even on the second day.

oh… and if I just had a coffee… those would be just perfect, but for now milk will do the job – it has to 🙂